I went to Chicago over the weekend of 3 November 2017 to see the Used play at Aragon Ballroom. Here is how things went down.

I departed immediately after work on 3 Nov. The trip itself was extremely uneventful (in the best possible ways) but the tollway kinda beat me up. I was expecting a toll or two, but I ended up spending about $10 in tolls on the way to Chicago. Next time I’m using an E-ZPass for sure.

Originally I was planning on sleeping in my car and driving back the day after. After getting to Chicago, I decided that was a silly idea and decided to get a room and spend another day. I left on Sunday, 5 Nov.

As soon as I got to my hotel, I found a parking ramp, parked my car and quickly grabbed all my valuables and checking into the hotel. I initially spent about 5 minutes at the hotel, just enough time to stash my valuables and get a Lyft to the Aragon Ballroom. My first Lyft driver was very friendly, and gave me a few recommendations/places to check out. I learned that Chicago sold a good portion of the tollways to a joint venture between a company in Australia and Spain(?).

Since I got to Chicago a little later than expected I, unfortunately, missed most of Glassjaw as I arrived at the venue at approximately 19:30. I bought one very expensive beer and found a spot near the stage. I was probably about 20 feet away from the stage. The people around me were pretty cool, I talked to a couple of them briefly.

The Used put on a great show. Something about the Used and how they interact with the crowd seems to make everyone feel like they can be themselves. I even moved around a little bit! I had a great time.

After the show, I felt a little lost in a new city. I wasn’t very familiar with the area around the ballroom and my Lyft driver mentioned it wasn’t a very nice neighborhood anyway. I decided to go back to my hotel to get my bearings and do some research. I was very hungry and I found a place called Pick Me Up Cafe. They have a lot of specific vegan options on their menu, I wanted one of each, however after consulting the server, she talked me out of it as the servings were large. She was right. Here’s what I ordered (all vegan, of course): 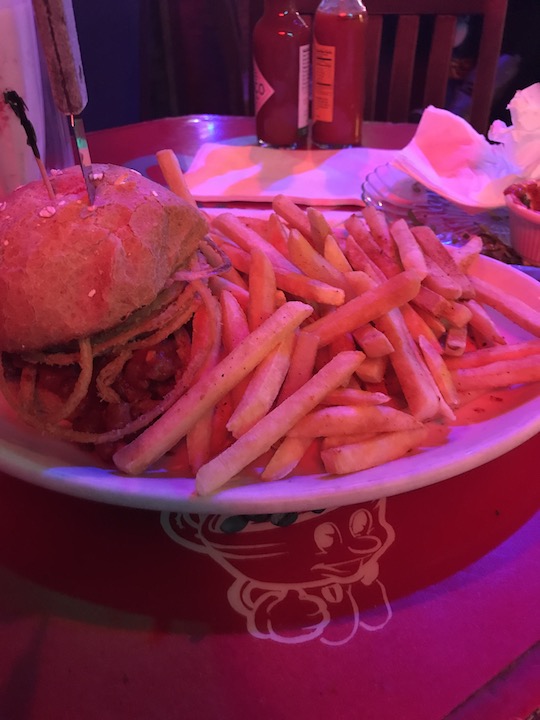 In hindsight, Jameson wasn’t the best thing to spike a shake with. It tasted kind of odd. Next time I’ll consider a vodka or a schnapps.

The food was delicious and I left the cafe feeling good and full. I went back to my room and talked to a friend for a few hours before deciding to turn in about 03:45.

I woke up on Saturday to the sound of rain pattering against the window. I was as surprised as anyone would be who hadn’t checked the weather. After all, the rest of this trip after Friday night was entirely impromptu. There was a lot of fog, too, which was neat because the tops of buildings were hidden in the abyss.

For lunch, I ate at Kitchen17, an all-vegan pizzeria. This was my first experience with a Chicago-style deep dish pizza and I was thoroughly impressed. I was overly optimistic by thinking I could eat it all. I quickly learned I was wrong.

My main method of transportation were buses and trains operated by the Chicago Transit Authority. This city continued to impress me. My only other experience with public transportation has been Metro Transit in Minneapolis, and CTA blew it right out of the water. There were plenty of routes to choose from, and the train got me out of the loop and to my next stop in half an hour flat. For comparison, that would’ve been about a 45 minutes drive, or at least an hour-long bus ride.

On Saturday evening I decided to go to the Water Tower Place, a mall in downtown Chicago in the Loop. It was fairly similar to the Mall of America, with fewer stores overall and more expensive/high-end stores.

I learned that Amazon has some retail footprints (called pop-ups, I believe). I was looking for a longer lightning cable since I’ve been using USB extension cables and they’re starting to wear apart. An employee noticed me looking at them and the exchange went something like this:

At that point, he realized I knew he was blowing smoke, and I was going to buy the 6’ cable anyway, so I didn’t push him any farther. I do get a kick out of those conversations though!

After the mall, I was hungry again and ate at a vegan short-order restaurant called Kal’ish. I got what I presume was a black-bean burger, and fries. I would go back. 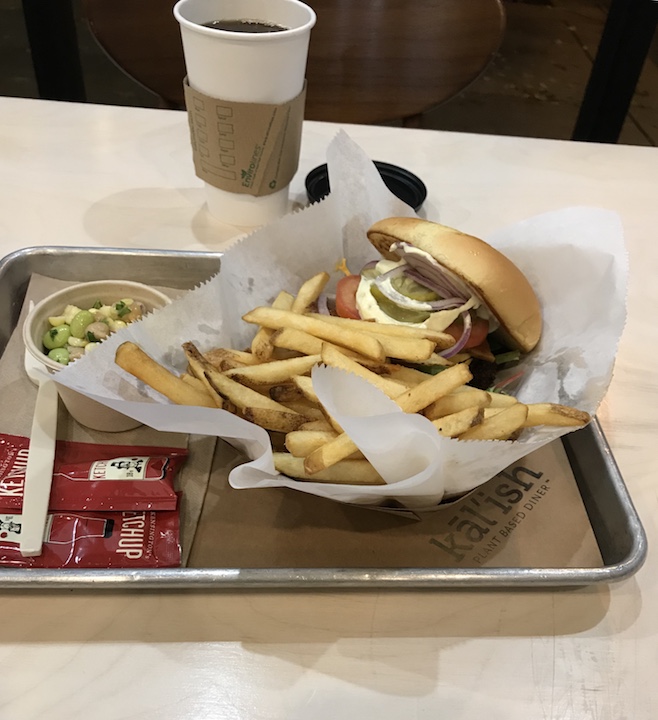 I was originally going to eat at the Chicago Diner, but after being told there was a 15-45 minute wait, I decided to take a 45-minute bus ride to the Handlebar, and I’m glad I did. As soon as you walk in the door you’re greeted with punk music and similar artwork on the wall. I ordered a vegan breakfast burrito and a plate of chili cheese fries. 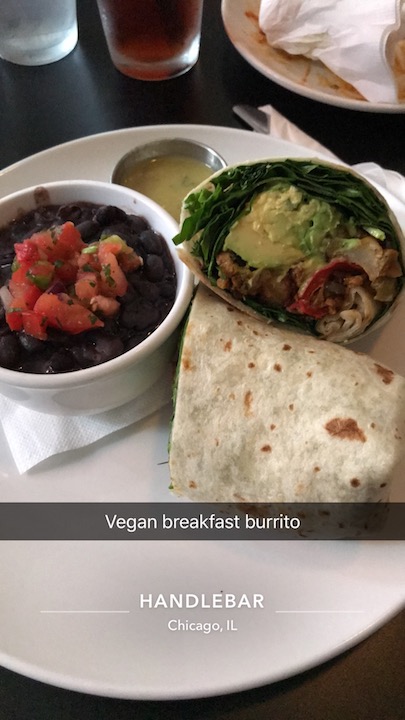 I could’ve been fine with just the plate of chili cheese fries. The plate was massive. However, leftovers are never a bad thing.

My time in Chicago was coming to a close, and I was feeling rather sad about it. However, I convinced myself I can always come back, and departed to spend a few days in Milwaukee.

As I was driving on the freeway, my car was making a really loud thumping noise coming from the rear passenger-side tire. I figured I should get it looked at in Milwaukee, however, me being cheap, I decided to ignore it.

That Sunday night, I met up with a friend in Milwaukee and we went to the Landmark bar to catch up and play some arcade games. Afterwards we went to the Comet Cafe to grab a bite to eat.

I’m always impressed to find places that serve vegan food, and especially good vegan food. Sometimes I’m inspired to get some little cards made to let the owners and staff know that I ate there specifically because they serve vegan food.

Monday in Milwaukee was relatively uneventful. After all, it was Monday, and Milwaukee is in Wisconsin. /s

I did eat some rad vegan pizza thought. It was from Ian’s Pizza by the Slice and I ordered the Taco Pizza. 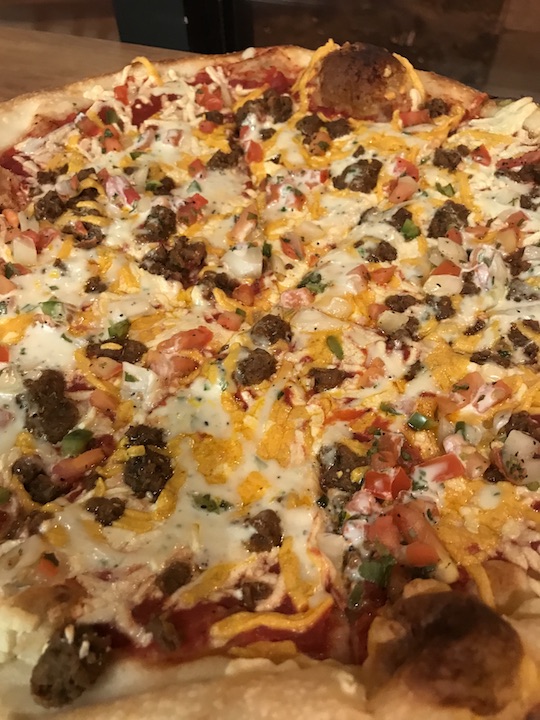 I left Milwaukee at approximately 0900. After about an hour into my trip, just North of Madison, my fears became real. Remember the noise my tire was making? Apparently there was tire ply-separation. The tread of my tire separated from the tube underneath and caught on something sharp in the wheel well and literally shredded apart. At 80MPH on the interstate, that’s a terrifying experience. I managed to quickly pull off onto the side of the road, unfortunately there was a barrier on the right side of the shoulder, so I was only two feet away from the traffic lane - and not everyone moves over.

I called Roadside Assistance and was able to get a tow to a shop that could help me out. The first shop we went to was booked for almost a week out - that wasn’t going to be acceptable. Thankfully the tow truck driver was able to get my ride and I to a shop closer to Madison that would be able to help me out the same day. 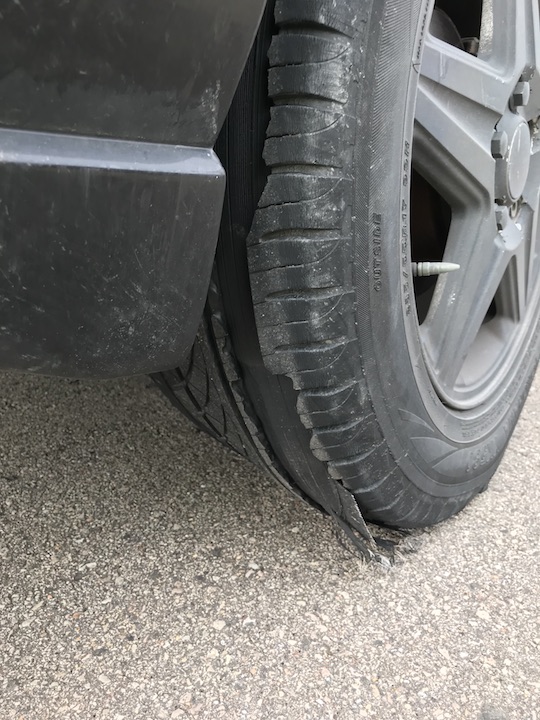 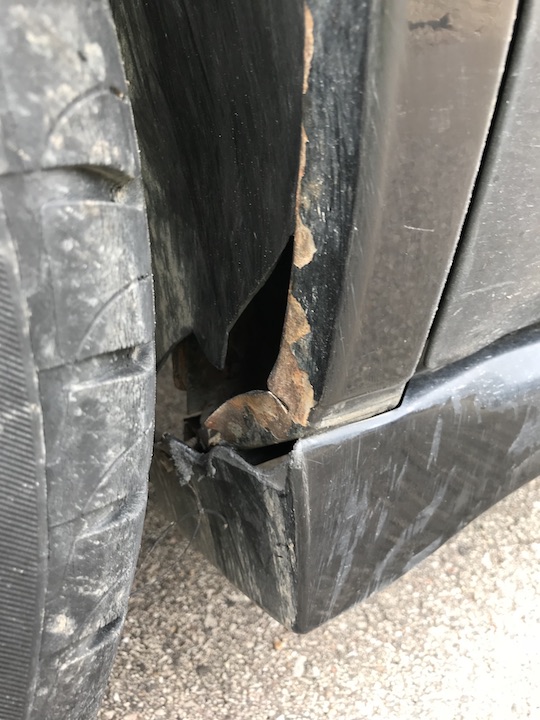 I liked Chicago, a lot. I almost fell in love, but after being back in Minneapolis, I’m reminded why I like it here.

My final impression of Chicago is this: I think I would like to live there someday, but that day isn’t today, and I doubt it will be that day for some time yet. I was very impressed at the amount of strictly vegan restaurants that exist in Chicago (at least in the neighborhood I was in), and the options at not-strictly-vegan places were mighty tasty also.

I'm a systems administrator & engineer, front-end and back-end developer, and an IT guru in St. Paul, MN. It’s nice to meet you.